When I looked outside my window it was foggy and it cold. Vague colors of the trees would shine trough the fog, and I already saw myself in the middle of the forrest with my tarp. Red, brown and yellow leaves would be all around me, while I was making a fire or drinking coffee in the morning. Getting ready for the ride towards the Rough Conditions Adventure Film Festival and the International Cycling Film Festival in Herne, Germany. But I was not there yet, from where I was looking out the window to Herne was 220 kilometers. And traveling to an adventure and cycling film festival should be done in style, with a bike and a tarp!

The first couple of hours where messy. My odometer didn’t seem to work, I nearly lost my lamp, almost fell down and injured myself a little and did a 10 km detour. But soon I was on my way trough the colorful forests. The fog was still there, and this made everything look as mysterious as Grimm story. While it was getting dark around 17:00 I decided to cycle on in the dark. My phone didn’t work anymore since I was in Germany now, but I knew what road to take. It was a long road. A big road with a small cycling path next to it. No traffic lights, just darkness. I made my way over the 20 kilometer long road. Nothing but farmlands and an occasional headlights from cars. Eventually I found a beautiful spot for my tarp somewhere in a small bush.

The next day the weather became better, I was even cycling in my t-shirt! And this in the end of October! Needles to say I was enjoying the trip very much. The smell of autumn, colors of the trees and soft temperatures made everything perfect. At 20:00 I arrived in Herne, just in time for homemade pizza and beer with the guys from the film festival.

Last year I got to know the people from the festival. I’ve sent my very first adventure film and it was on the program. They also invited me, and there was a click, so this year it was time to push things a bit further.

I was asked to program the Friday evening, the day before the main event. The idea of the Rough Conditions Adventure Film Festival was born, and it was my task to make a selection of films ending with my own film “Why we go out” as an answer to the question: what does adventure mean? We had 8 films in total ranging from cycling till swimming till rowing. But an adventure is a story and these can be told in many ways. Making the festival a bit broader then just films I gave a talk about the rollerblading trip I took last February to show that normal people like me are fit for an adventure too. More films came, and before the main film we held a discussion with the audience about what adventure means to us, and what the films ment to us. This discussion was held from a rubber boat on the stage. Perfect!

Saturday was the day of the main event: the International Cycling Film Festival. The whole thing started with a 50 man strong Critical Mass starting in Dortmund, I joined in Bochum. A while later we arrived in Herne, where the Dortmund Velo Kitchen waited for us with delicious banana curry, good for the leg muscles! At 17:00 the afternoon program started. While eating my curry I saw a very cool animation about Albert Hofmann his cycling “trip” back home from his laboratorium. I wondered how long the road back home would’ve been for him.

Around 19:00 the hall became fuller. At 19:30 all the chairs where taken. At 20:00 everybody was sitting and standing everywhere! 300 people where here to celebrate  cycling culture! Loads of pannier bags, click shoes and cycling shirts. The films sucked up the attention of the audience and between the films the was a real race. Cyclists can’t go without a race, thats a common fact. But since we where in a hall, the organizers came up with a great idea. Make a digital race! With record-players hooked on hometrainers. The faster you cycle on the hometrainer, the faster the record plays and the faster the image moves on the screen. From two people, the fastest would go on, until there was only one left.

More films where playing, from documentaries till short animations. But all with bikes in them. People cheered, were amused or thrilled. There were 16 films to show, but only one could be the winner of the famous “Goldene Kurbel”. This was the Dutch film: “De benen van Amsterdam” (The legs of Amsterdam) from Wytse Koetse about a bike repair man from Amsterdam. His job is not only repairing bicycles, but more helping people when their “legs” are broken. The audience award was also for a Dutch film: “Groen” (Green) from Lucas Camps about a guy standing before a traffic light. I think all the people could recognize this situation. 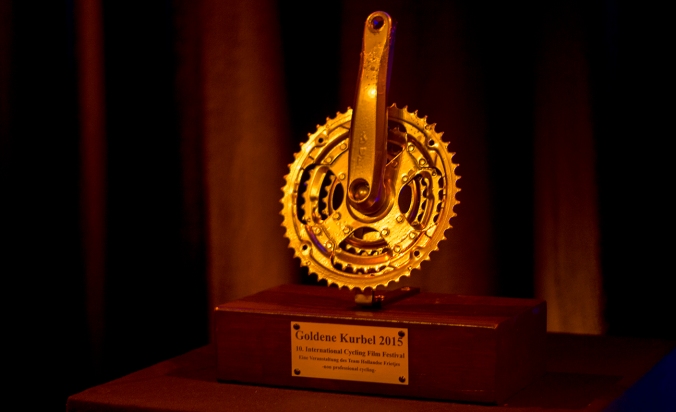 For me it was a great weekend full of cyclists, cycling-films and banana curry. It was a celebration of adventure and cycling culture. A day where cyclists and adventurers from the Ruhr area in Germany meet, talk, make plans and drink a cold beer together. Who knows what kind of journeys where inspired by this weekend.

On Sunday it was time for me to return home. I would take the train, but not before I cycled from Herne to Oberhausen, trough the last sun rays while the most colorful leaves fell from the trees. In the end I took the train back to the Netherlands. In the train I had time to reflect and knew this cycling world was a good world. Crazy events are held, people are active and motivated. Im glad I will be hosting the festival in 2016 in Groningen. Groningens first cycling film festival will be a fact and maybe we will have a swim first, like this year.