Nomads, hitchhikers, cyclists, squatters, sailors, adventurers, street performers and all kind of travelers gathered in the Vondelbunker during the Alternative Travelers Gathering Amsterdam. Sharing knowledge they learned on the road, give workshops, connect and to drink beers together. The Vondelbunker changed into a travelers walhalla. And I don’t mean the Lonely Planet travelers or city hoppers, but the real travelers. Going around the world with their thumbs held high, traveling for political causes and activism or to see what the world has to offer next to the comfortable life on the couch. Some sleep under bridges, while others surf couches or work their way around. For 72 hours these people gathered and this is what I saw. 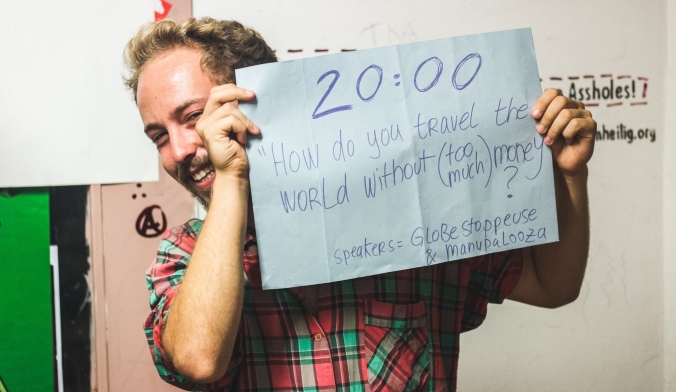 Friday evening the event kicked off. It started with a relaxed conversation between organizer Manu and all-round traveler Anick-Marie. They discussed how to travel the world for free, or with not too much money. Topics such as volunteering on farms, hitchhiking and skipping (or dumpster diving) came to table. Many good tips where given, stories where told and clearly the ladies had fun talking about their passion. Sharing their knowledge they learned from years of traveling, passing it on to the less seasoned traveler. Next up was a presentation on a book about juggling; “Pearls of juggling”. 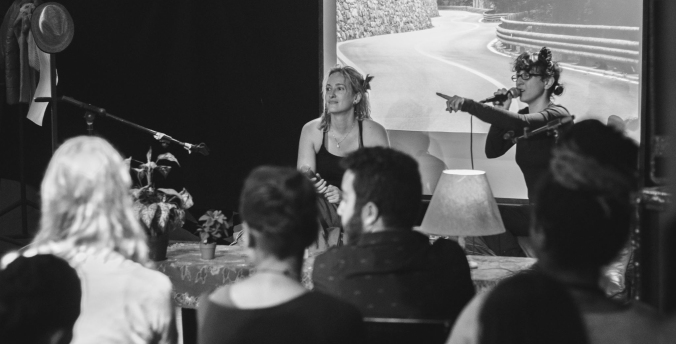 After a short break it was time for the film festival I’ve set up. 10 short films about journeys on biking, walking, sailing or kayaking as a means of transportation and adventure. Also adventurer Henk van Dillen gave an interview about making films while being on the road, and what makes an adventure film a good film. People get away with some nice images with music, but if you want to make a real film, to my idea this is not enough. Henk gave some tips and tricks on how to get past the point of images with music. Next to the films and the interview an I gave an improvised talk about my last big cycling journey, but I don’t think the audience noticed it was mostly improvised. After the films it was time to head on to our temporarily home with adventure-partner-in-crime Henk, close to the red light district. Drunk tourists, puke everywhere and the occasional question if I want to buy drugs. Let’s say Amsterdam centre on a Friday evening is not the best place for an alternative traveler.

After a good English breakfast it was time for the next day. It started off with my bike being broken on the way to the venue. This kinda sucked because I was to be a taxi for Sunday evening, but with a little help from some people it was “– only temporarily!” fixed. Because of this project I sadly had to miss a couple of lectures. But while fixing the bike we heard songs of adventure played by Otillia Kasberben. Perfect music to fix bikes to! 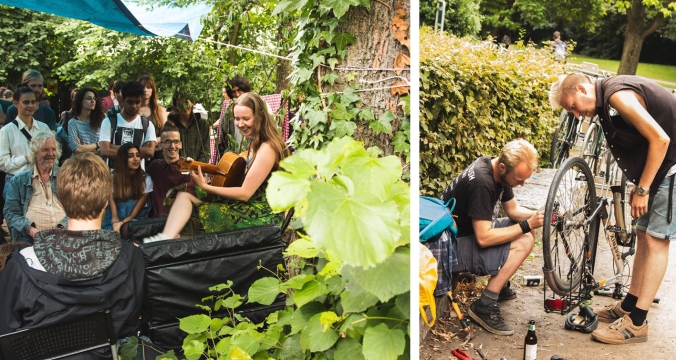 The day started with the girls from The Travel storytelling festival. A festival where speakers, workshops and storytellers get together to inspire the listener. I joined a lecture about using mindmappiing to set your goals. If it’s about travel or not, this tool might come in quite handy for visualizing your ideas. I use it now and then when I start with new projects.

The storytelling festival brought two speakers; the social traveler (He travels the world continuous since 2010 and lets people give him projects trough social media) and the “space cowboy studio”. He is a boat hiker with the dream to sail the world. He told about the art of boat hiking. It’s the same as hitchhiking, but in stead of sitting on your ass, doing nothing but watching the road pass by, now you’re active as a crew member on a boat. His presentation was great. Pictures mixed with stories and the occasional film of people getting seasick (you know how it looks like, it’s not pretty) and a short film about mutiny and how to deal with this (tie down the captain to the mast). I was really wondering if I could do this too, hitching a boat sounded pretty great. At least, if I wouldn’t get seasick.

All the stories made me hungry and it couldn’t be on a better time. Taste Before You Waste just made an awesome free dinner from skipped food. With the “trash” from the supermarkets many people filled their stomachs. And while some where eating, others let their hair be done, were chilling, drinking a beer or chatting around. After the dinner it was time for music. Great, I could use some tunes! It was time for the great ZTRATILA SE KOCKA, a street performer from Brussels. Her face was painted like a black cat and she wore a blue robe. Her music sounded to me as French chansons with a squatter punk mentality. So if you think of punk-chansons, I think you get close. She had an amazing voice, sometimes singing beautifully then screaming like a tiger. After this show it was time for some fresh air, and so I missed the show afterwards. When I had to go to the toilets another sound came into my ear; dark beats with loud vocals over it. I don’t know the name of the artist but it was pretty good! Just one girl who made a wall of dark electronic sounds. After the shows it was time to go and some other nice places in Amsterdam, but sadly for us there were only tourist places full of english drunkards… So it was time to hit the old dusty trail once again.

Another noisy night of sleep later we were woken up by the parents of Manu (she arranged a place to sleep for us; it was her parents extra room) with good coffee and good conversation. Fueled by the the coffee we got to the venue to get dropped in a discussion on solo travel. About the safety, about packing your gear and about all the issues you can encounter when traveling solo. Oh, and some great stories too! Some stories were almost told like I was there, but that was maybe also because I could put myself in their shoes. Although I’ve never found myself in Patagonia in -5C with only summer clothing…

In between there was a lecture about slow travel from Monique Besten. She is a walking artist who uses walking long distances as a method to create her art. I was truly inspired by her talk and her ability to create art from her journeys. I didn’t know about this lecture; I guess great things come as a surprise.

Sadly I’ve missed the digital nomads discussion, mostly because I was running around to prepare for the adventure workshop. During the adventure workshop we really went onto an urban adventure. We’ve seen sitting in this bunker for two days, hearing stories about travel, discussing adventure and seeing pictures of journeys around the world. Now it was time to get out and hit the road. After an inspiration round, some 15 people went out in small groups and brainstormed about an idea to make a little adventurous journey in the city. One group came up with the idea of a hitchhiking race. They set out in 3 duo’s and had 1,5 hours to go from the Vondelpark to the Nemo Museum and back. That was not as easy as it seems! Even the most seasoned hitchhikers found it hard to catch a ride/boat/bike/tram in a busy city like Amsterdam. Two of the three duos came back in time, the other had to get a ride back with the bus. But at least they tried, and this is the most important party of every adventure, how big or small it is. Just try it.

Sadly the adventure workshop and lectures about political travel/squatting fell together, so I had to miss a couple of these lectures, but luckily I didn’t miss the the lecture on squatting in Amsterdam. Maks spoke with fire about this and I could see how this was not only a thing he spoke of, but a thing he lived for. I’ve heard about great things I didn’t know like the Adev and SWOMPS, but also things I knew about like an underground agenda or the valreep project (sadly, now evicted).

More music was played during the night, but my head was full with all the conversations, lectures, workshops, people, stories and impressions. Sadly I couldn’t see everything, but it is like a festival; sometimes you just have to make choices in what you can see. Getting together with a bunch of hitchhikers, adventurers, backpackers, nomads and squatters was great. All the people where so different! Our love for traveling and seeing the world on different ways brought us together. Because of events like this we can really connect on a level that goes way deeper than Facebook, whatsapp or any other digital social system. Nothing beats meeting other travelers in real life, inspiring them by looking them in the eye and hearing stories of real adventures. Gatherings like this brings a scene together, a scene that is scattered all over the world, because we are alternative travelers. 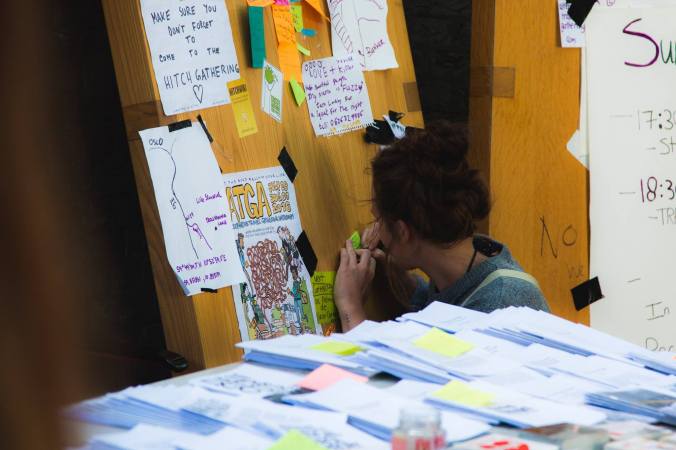 Now it’s time to get ready for my next adventure in two weeks; Rollerblading 1600 km’s trough the UK! You can like my Facebookpage in the meantime, and keep updated on the trip.

All pictures by Lucca, check out his page!